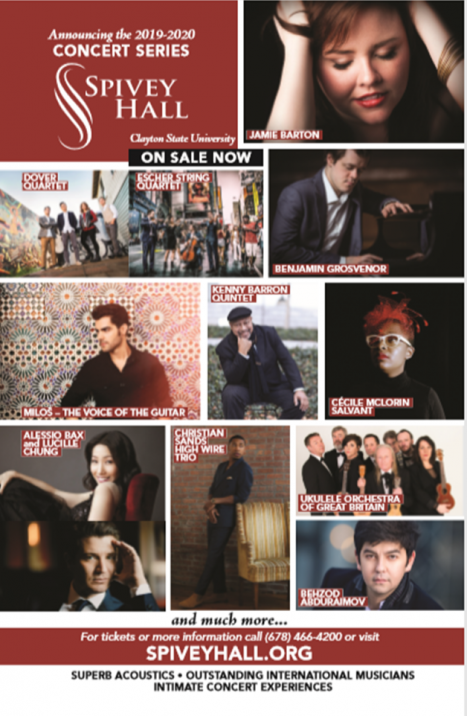 Spivey Hall boasts an astounding 58% of subscribers who are donors this season. The Blank Foundation Audience Building Roundtable research shows that this number typically averages roughly 25% for arts organizations, which speaks to the strength and caliber of Spivey Hall's programming. "Support from donors and concert sponsors sustain the artistic excellence of the concert series at Spivey Hall. As a concert sponsor, a donor meets the artist and perhaps hosts a reception for the Spivey Hall Friends, their guests and the artists," explained Tigner.  "Wonderful new friendships and connections develop at these receptions amongst the donors and the artists. There are few concert hall experiences where one is able to meet world-renowned artists like Joshua Bell, Emanuel Ax, Regina Carter, Stephen Hough, Kate Lindsey, Jamie Barton and Simon Keenlyside in such a casual and intimate setting."

Spivey Hall's 2019-2020 season will feature 24 series performances (Strings, Piano, Organ, Vocal and Jazz), 6 special event performances and a host of educational opportunities for educators, supporters and music lovers alike. "Spivey Hall has 400 seats, so it's a mathematical miracle that it routinely books internationally renowned artists like violinist Joshua Bell and vocal ensemble Chanticleer," wrote Atlanta Magazine in their Best of Atlanta 2018: Arts & Culture edition. "An endowment is part of the equation, but it still wouldn't compute without Spivey Hall Executive and Artistic Director Sam C. Dixon, who has a knack for wooing top talent and scouting out tomorrow's stars."

Select Season 29 performances begin with an entertaining and informative pre-concert talk or post-performance social reception. Pre-concert talks are given by Spivey Hall speakers of high distinction. These interactive sessions are designed to enhance patrons' musical knowledge and listening experiences. A full listing of Season 29 performances, including artist information, can be found on the Spivey Hall ticketing page: www.clayton.edu/spiveyhall/concerts.

"Spivey Hall's superb acoustics and intimate size enable listeners to feel a deeply rewarding sense of personal connection musicians and their music, whether it's classical, jazz, or a mix of genres," stated Dixon in his opening remarks. "For these reasons, and the consistently high quality of artists who perform on our stage, music-lovers come here from throughout metro Atlanta, the Southeast and beyond to experience live music at its best."

Season 29 subscriptions and single tickets are on sale now.  A Season 29 brochure may be requested at Spivey Hall's website, spiveyhall.org, by calling the Spivey Hall Box Office at (678) 466-4200 weekdays from 9:00 AM to 5:00 PM, or by visiting Spivey Hall. Subscriptions and single tickets may be purchased by completing and mailing the order form included in each season book; by calling the Spivey Hall Box Office; via fax (by credit card only) to (678) 466-4494; and online at spiveyhall.org, where a downloadable version of the Season 29 brochure and calendar listings for each concert may be found.

Spivey Hall Friends Concert Sponsorships, which vary in level by artist, are available for all Spivey Series concerts at Silver ($2,500), Gold ($5,000) and Platinum ($10,000) levels and include an array of tiered benefits. For information about available sponsorship opportunities, please telephone Spivey Hall's Development Specialist at (678) 466-4486 or email spiveyhallfriends@clayton.edu.