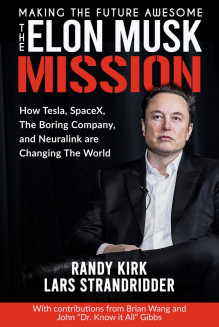 Tesla is headed towards a value equaling Apple plus Saudi Aramco, according to Elon Musk. But don't count out the other Musk enterprises. Starlink alone may someday be the largest company by market cap on earth. The future belongs to Musk, and a new book explains in great detail every single company, why they are going to change our lives, and why they will each be worth Trillions. The Elon Musk Mission - Making the Future Awesome is available on Amazon.
RIVERSIDE, Calif. - PrZen -- Elon Musk recently claimed that Tesla's market cap would one day exceed that of Apple and Saudi Aramco, the two largest market cap companies today, combined. This would be quite the feet, but it doesn't take a financial genius or math wizard to figure out that this is obviously true. Or, at least that is the claim of a new book that has four experts on Elon Musk as the authors.

Randy Kirk has already produced an Amazon Best Seller about Elon Musk, The Elon Musk Method. Lars Strandridder is the owner and host of a popular YouTube Channel about Musk. Dr. John Gibbs is an AI Professor who also has a successful YouTube Channel, and Brian Yang is a scientist and engineer whose blog has been cited by famous futurist Peter Diamandis and by marketing guru Seth Godin

Their new book, The Elon Musk Method - Making the World Awesome, has just been released to phenomenal reviews on Amazon. The goal of the book, according to Kirk, "Create a source for journalists that compiles the  truth about the Elon Musk companies, and help folks who are new to the subject learn how these incredible businesses are going to impact their futures." Find the book at https://www.amazon.com/dp/B0BKNNLVXM

Tesla is disrupting the auto industry, the trucking business, the energy production and storage business, the auto insurance industry, and is now working on creating a future where robots will transport us and replace boring, repetitive, and dangerous jobs.

Another Musk company, currently valued at over $100 billion is Space X, one of the largest privately held companies in the world. One division of SpaceX is Starlink, which is clearly going to be worth trillions of dollars in the very near future, when Musk is also promising to spin it off into a publicly traded company. The Elon Musk Mission makes clear that Starlink is likely to be almost as big as Tesla in the near future.

SpaceX, even after spinning off Starlink, is the number one rocket company in the world, and has a clear path to being worth trillions in the future. Neuralink, The Boring Company, and Twitter round off the companies where Elon Musk is in charge. The book gives evidence for each of these to eventually be among the largest companies ever.

The book is available on Amazon as a Kindle, hardback, paperback, or audiobook. https://www.amazon.com/dp/B0BKNNLVXM