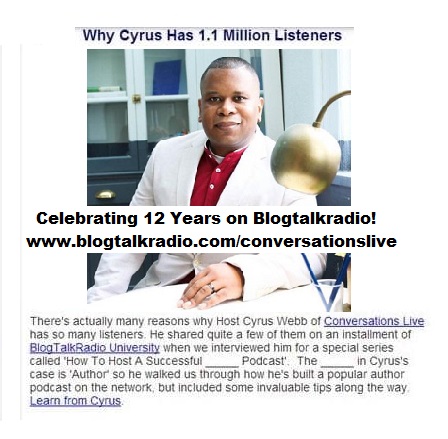 Keeping his home base in Mississippi, Cyrus Webb has used Blogtalkradio to build a worldwide listenership.
NEW YORK - PrZen -- In 2008 media personality Cyrus Webb began broadcasting his radio show Conversations LIVE on Blogtalkradio.com, a platform he has just heard about that year through a friend. Initially he saw it as a way to widen his listenership which at the time was based in Mississippi where he was already on the airwaves.

"I had no idea at the time where Blogtalkradio would lead me," says Webb, 44. "I just knew I could connect with my guests and my audience by using my desktop and a phone."

Fast forward twelve years later and Webb has become one of the most popular and sought-after hosts on the platform, reaching millions of listeners and bringing with him celebrity guests from around the world including DeVon Franklin, Leeza Gibbons, Isaiah Washington, Mark Nepo, Stephanie Mills, Billy Ray Cyrus and others.

Webb not only hosts his daily radio show Conversations LIVE on the platform. In 2015 he began another show, a program called Conversations Daily News where he delivers the news of the day, shares a daily entertainment spotlight and features an Artist of the Week. It,too, has garnered attention from around the globe.

For Webb it's not about the numbers. The real success is in the longevity. "I love what I do," he says. "I am able to reach the world through a message online that is both inspirational and entertains. The fact that people listen and that we continue to grow is all the reward I need."

In 2019 Webb celebrated his 9,000th guest on the show. He is looking forward to what's to come in the years to come.