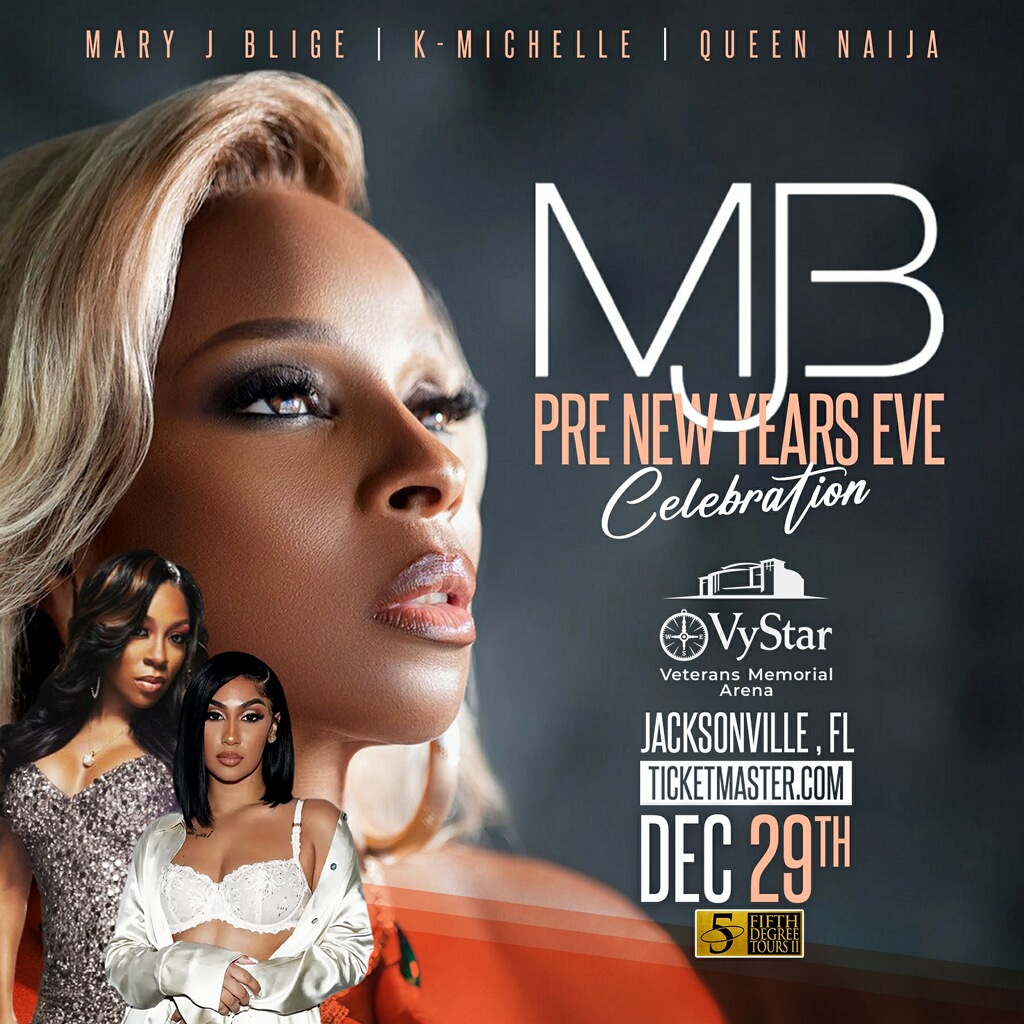 Jacksonville, kick off your New Year's celebrations this December with the Queen of Hip Hop Soul at VyStar Veterans Memorial Arena
JACKSONVILLE, Fla. - PrZen -- Grammy Award winning and Academy Award-nominated singer, songwriter, actress Mary J. Blige continues to captivate audiences nationwide with breathtaking performances on her Good Morning Gorgeous tour, and Jacksonville, FL will get to experience this treat during the finale of the holiday season. Mary J. Blige will perform on Thursday, December 29th with special guests K. Michelle and Queen Naija at VyStar Veterans Memorial Arena to kick off celebrations welcoming 2023.

This show is produced by national concert tour and event company Fifth Degree Tours II. Reviews from previous Good Morning Gorgeous tour locations describe the show as empowering and inspirational, highlighting themes of self-love and resilience. It's the ultimate "Ladies Night Out" experience! The trio of powerful soulful voices is an exciting way for fans to jumpstart their new year.

Pre-sale is available on Thursday, November 17 via Ticketmaster.com and the Vystar Veterans Memorial Arena. Fans can access this offer using the special code "Gorgeous". Tickets will be available to the general public on Friday, November 18 at 10:00am EST. This show is expected to SELL OUT quickly, so make sure to secure your tickets now!

"Mary is a powerhouse, and we are honored by the opportunity to partner with her on this special experience," explains the CEO of Fifth Degree Tours II, Wesley Hunter. Mr. Hunter shares "We're doing this in Jacksonville because this city has been good to us. It's a big military town and we want to show appreciation to our men and women in the service by bringing such a fantastic show to them. We want to put smiles on faces and create positive memorable experiences."

As we near the holiday season, Fifth Degree Tours II plans to donate concert tickets for December's show to local charities in the Jacksonville, FL area. The company previously donated 71 tickets to Hubbard House domestic violence center for their Maxwell Night Tour Hurricane Ian Relief concert October 2nd at Vystar Veterans Memorial Arena in Jacksonville, in addition to supporting organizations throughout Florida providing relief to the survivors of Hurricane Ian. We're calling all R&B lovers from Florida up to Georgia and the Carolinas to come together as these three Gorgeous women fill your souls. Doors open at 7pm. Show begins at 8pm.

Mary J. Blige turns everything she touches to gold, revealed by her impressive track record of accolades. Blige's accomplishments include nine Grammy Awards (32 nominations), ten Billboard Music Awards, eight multi-platinum albums, two Academy Award nominations, a Primetime Emmy Award, along with many other honors and awards. Mary's career began in 1988 when she was signed to Uptown Records by Founder Andre Harrell. Her iconic debut album, What's the 411, uniquely blended Hip Hop and Soul on a mainstream platform – This sound earned Mary J. Blige her undisputed title as the "Queen of Hip Hop Soul." Both What's the 411 and her second album My Life are featured on Rolling Stone's 500 Greatest Albums of All Time list. Blige has released a total of 15 albums, with legendary hits like "Real Love," "Not Gon Cry," "Be Without You," and "Family Affair." Every one of her performances is a sing-along affair.  Mary J. Blige has also dominated in the television and film space through programs like Mudbound: The Umbrella Academy, Power Book II: Ghost, Respect and documentary Mary J. Blige's My Life. The world stood in awe during the February 2022 Pepsi Super Bowl LVI Halftime Show in Inglewood, CA as Mary put on an unbelievable performance alongside Dr. Dre, Eminen, Snoop Dogg, and Kendrick Lamar. With the release of her most recent album Good Morning Gorgeous, Mary has shown fans that she still shines bright, continuing to be a symbol of confidence, inner-beauty, and strength for women worldwide.

Memphis, Tennessee native K. Michelle is a talented singer-songwriter and impressive instrumentalist on the guitar and piano. She has amassed a cult following as a member of the Love and Hip Hop: Atlanta cast along with a number of other reality shows, including K. Michelle: My Life. Michelle began her music career in 2009 with Jive Records, releasing her first R&B-charting hit single "Fakin It" ft. Missy Elliot. Her follow-up singles "Fallin," "I Just Can't Do This" and "How Many Times" were also R&B-charting successes. Her debut album, Rebellious Soul, was released under Atlantic Records and entered the Billboard 200 at No. 2. The album also enjoyed success on the US Top R&B/Hip Hop Albums chart in the No. 1 spot. Her second album, Anybody Wanna Buy a Heart sold 87,000 copies in the first week of sales! K. Michelle has won a Soul Train Music Award, an NAACP Image Award,and has received four BET Awards nominations. In 2015, she was honored with an ASCAP Women Behind the Music award.

Queen Naija got her start in the business as a YouTube vlogger, then participated in season 13 of American Idol. Naija self-released her first single, "Medicine," and drew the attention of industry leaders when the song landed on Billboard Hot 100 at No. 45. She then signed with Capitol Records and the rest was history. Naija's 2018 self-titled EP debuted at No. 26 on the Billboard 200, and earned her nominations for Top R&B Artist at the Billboard Music Awards and Best New Artist at the BET Awards. Her debut album, Misunderstood, debuted on Billboard's Top R&B Albums chart at No.1, landed in the Top 10 on the Billboard 200, and has enjoyed three platinum-certified singles – "Butterflies," "Karma" and "Medicine." Queen Naija has received over three billion global streams to date and the best part is she is only getting started.