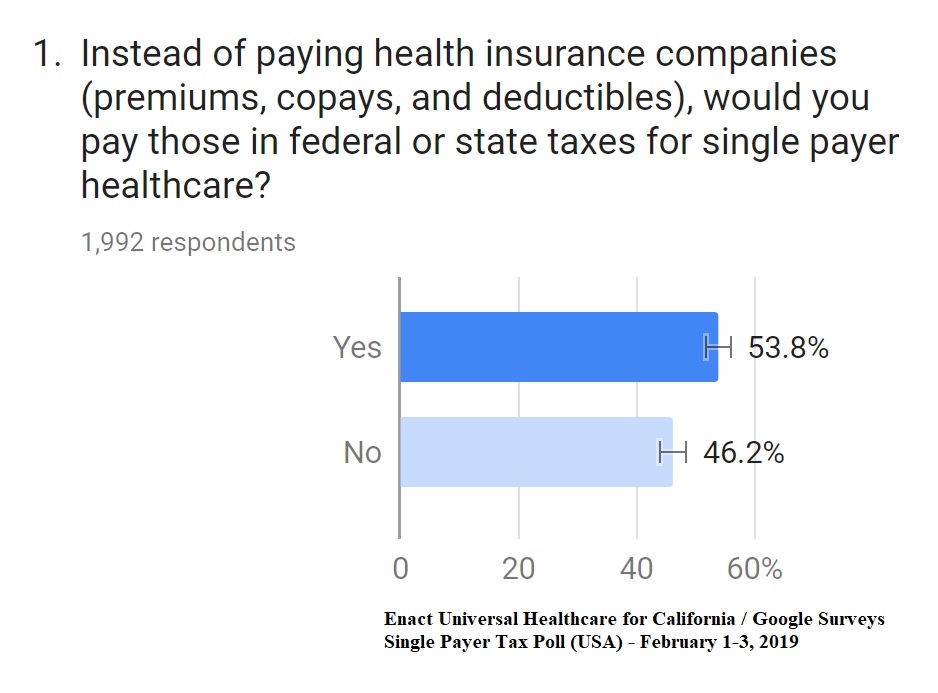 In a recent poll, 54% of Americans and 33 states said "Yes" when asked if they were willing to pay taxes for single payer universal healthcare.
SUNNYVALE, Calif. - Feb. 3, 2019 - PrZen -- A solid majority, 54%, of Americans said they support tax increases for a Single Payer universal healthcare system. Two-thirds of states, 33, had majority support.

"A healthcare rebellion is taking shape in the United States. With thirty-three states in support of taxes, this is constitutional amendment territory," said Dale Fountain, Chairperson/CEO of Enact Universal Healthcare for California.

"With 54% of Americans supporting tax increases, Single Payer is now squarely in the mainstream. Those who oppose are clearly in danger of being labeled fringe-conservative," says Vice Chairperson Michael Saucedo.

In January, EUHC4CA released its Soft Single Payer proposal for California, which costs the state less than half a percent of other single payer proposals, no tax increases, and provides tuition and retirement assistance to doctors and nurses.

EUHC4CA is the largest single payer organization in California with over 117,000 supporters within the state.

Methodology:
Enact Universal Healthcare for California partnered with Google Surveys to ask one question: "Instead of paying health insurance companies (premiums, copays, and deductibles), would you pay those in federal or state taxes for single payer healthcare?"