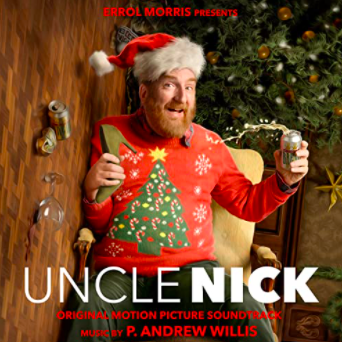 The Release of the Original Soundtrack for Uncle Nick, a Raunchy Holiday Film, is now available on iTunes, Spotify, and other Digital Providers
LOS ANGELES - PrZen -- Film and television composer, producer, and musician P. Andrew Willis has been crafting original music and sound for pictures for over 20 years.  His experience in creating haunting music for films like 29 Needles, led to working on the dark holiday comedy from Chris Kasick Company's/Dark Sky Films, Uncle Nick. The original music soundtrack has just been released and is now available on Amazon Music, Apple Music/iTunes, Spotify, and BandCamp.com.

Andrew's composition for Uncle Nick had a huge impact on the overall feeling of the film. The sound of a film supports and enriches the plot, and allows the audience to feel immersed in the movie; and crafting unique sounds is exactly what Andrew does best. Andrew produced and composed the original score for Uncle Nick, which is a dark holiday comedy starring Brian Posehn, directed by Chris Kasick, and executive produced by Oscar winner Errol Morris. The music for the film had a different approach than he had used in the past, not only did it have to embody that dark, tragic energy of the film, but it also had to accompany the more quirky and comedic side of the project.

Andrew highlights his unique style in his work; in particular, on Uncle Nick, Andrew noted, "I had percussion that I played on the steam radiators in my house as well as my own processed vocals to add rhythmic elements that were unpredictable sounding. This allowed me to flesh out the more orchestral instrumentation of strings and woodwinds as well as augmenting the sampled choral segments. I also played most of my own percussion in this score".

Previously, Andrew has worked on films such as; 29 Needles, a horror movie which delves into a man's increasing obsession with pain and sex, The Inhabitants, where created custom sample libraries of violin and bassoon effects, as well as Dark Feed, a found footage style horror film that follows a film crew who set up in an abandoned psychiatric hospital.

Andrew drew on his years of experience to compose a soundtrack to perfectly tie together the different elements of the film. "Most scores I've composed are very theme based. I love to weave them throughout a score to create cohesiveness or sense of being part of a whole."

Bringing together the juxtaposing elements of comedy and horror, Andrew was able to create a soundtrack that complimented Uncle Nick perfectly.

P. Andrew Willis is a composer, producer and musician based in Boston, Massachusetts, who has been composing original music and sound for film, television and advertising for over two decades.

His many credits include heart-wrenching films like PBS' American OZ, a look into the novel 'The Wonderful Wizard of Oz', The Battle of Chosin, a historical recount, Luckey, a documentary about a paralyzed sculptor, and the 'fractured holiday music' of dark holiday-comedy, Uncle Nick. Andrew has embedded his musical talent throughout a plethora of genres and projects.

Not only is Andrew a talented composer of original music, but he is also an instrumentalist who has recorded and toured the country. Andrew is currently playing bass with Roger Miller's (Mission of Burma) Trinary System, as well as finishing up an album by his ongoing experimental music project Crappy Nightmareville.