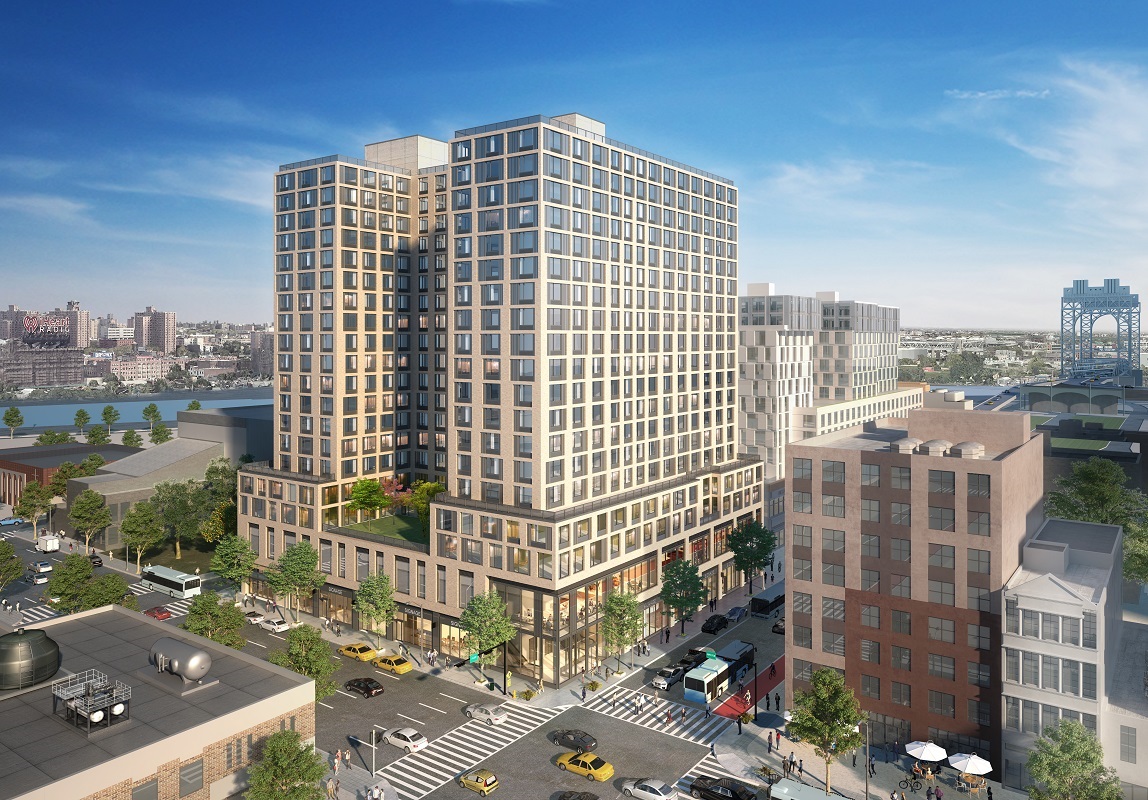 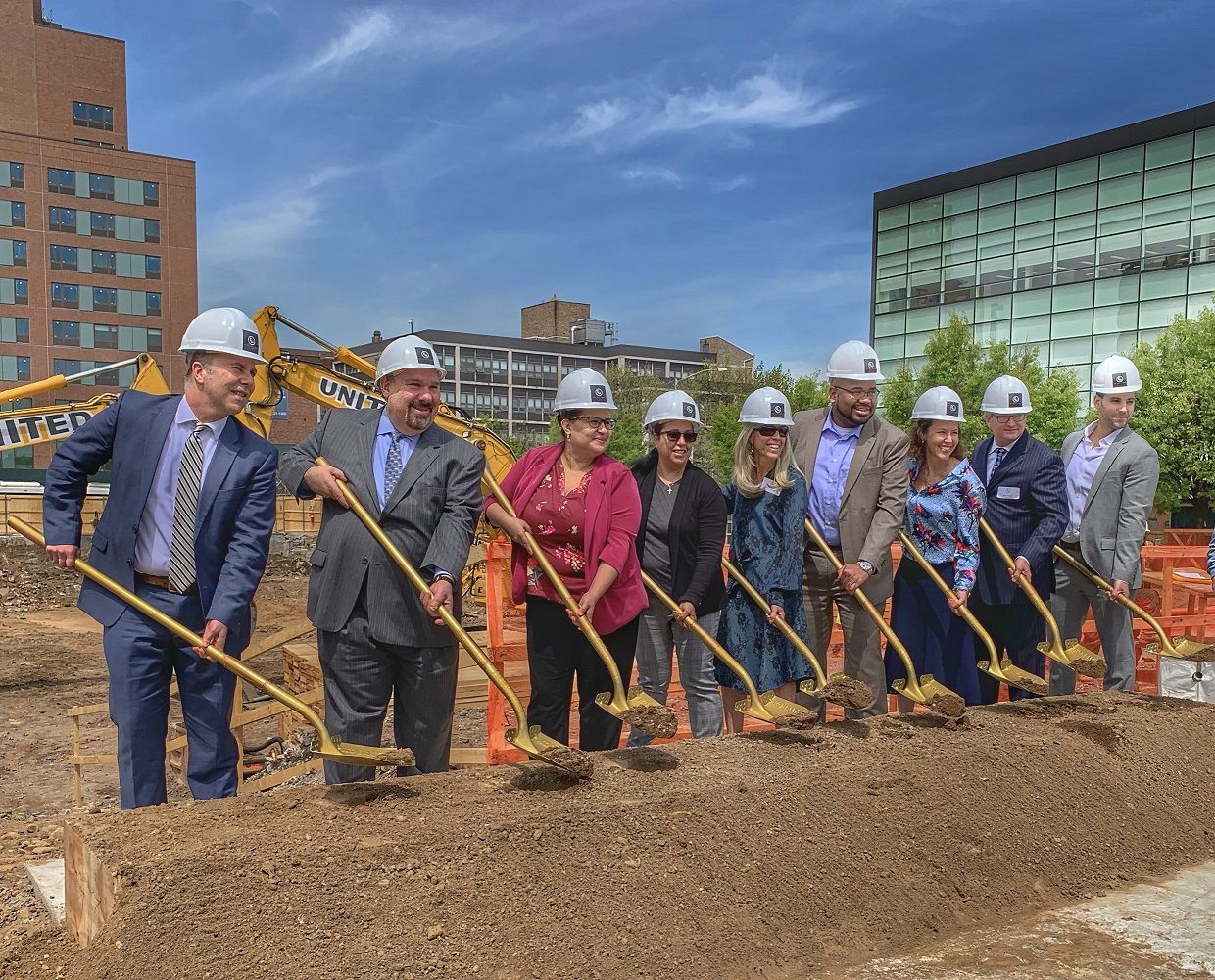 The groundbreaking was celebrated Thursday morning with Council Member Diana Ayala, Deputy Borough President Matthew Washington and members of Community Board #11, along with NYCHDC, NYCHPD and NYCEDC, all of whom were involved in seeing this next phase happen.

This phase includes 404 new housing units, 297 of which will be affordable in perpetuity, approximately 65,000 SF of retail space (including 45,000 SF for Food Bazaar, filling a void of an affordable grocery store that was left by the closing of the Pathmark), 10,000 SF of public open space, and 5,000 SF of cultural space to be tenanted by Groove With Me, a local youth development organization that uses free dance classes and performance opportunities as a tool to instill in young women the leadership, pride, spirit of cooperation, creativity, joy and discipline needed to confront the adversity in their daily lives and throughout their future development.

The first phase of the overall project, located on the southeast corner of E 125th Street and Third Avenue, was completed in 2011 and is comprised of 49 affordable units and approximately 5,000 SF of retail space. Once all phases are completed, with two more phases in planning, the overall project will include approximately 1,000 new housing units, over 170,000 SF of retail/commercial space, 10,000 SF of public open space and 5,000 SF community facility.

The One East Harlem project is a result of the City's collaboration with the East 125th Street Development Task Force, which dates back more than nine years. In January 2006, the Task Force was formed to help shape the community's goals for the project, which included affordable housing, economic development, local participation in the development and resulting employment, and space for arts and culture.

The group met regularly for nearly a year and hosted Town Hall meetings to solicit input. The work of the Task Force resulted in NYC EDC releasing a Request for Proposals (RFP) that reflected the needs and goals of the community. In January 2007, RFP responses were received, and the City and the Task Force together reviewed the proposals and selected The East Harlem Redevelopment LLC as the developer of the multi-phased project.

"The One East Harlem project will bring affordable housing, job opportunities, locally based cultural space, and a much-needed supermarket to our community," said Council Member Diana Ayala. "After years of planning, I am excited to finally see this project come to fruition. I thank EDC, HPD, Community Board 11, The Carey Group, and my predecessor, Melissa Mark-Viverito — all of whom have been incredibly instrumental in making today possible."

"What a wonderful day to celebrate the groundbreaking of the East 125th Street development," said Community Board 11 Chair, Nilsa Orama. "This community has waited a long time for this day. The combination of the retail spaces along with the community spaces and the various bands of housing affordability will add to the continued revitalization of 125th Street."

"Today we break ground on a project that embodies the essence of what we're striving to achieve through Housing New York. This interagency effort to partner with committed nonprofit partners and community stakeholders will bring hundreds of high-quality jobs and nearly 300 permanently affordable homes to Harlem, as well as vital cultural, commercial, and open space that will serve the community for years to come," said HPD Acting Commissioner Eric Enderlin. "I thank Manhattan Borough President Gale Brewer and Council Member Ayala for their leadership, as well as development partners and colleagues at HDC and EDC for all of their hard work to make this project a reality."

"HDC is proud of its role in making One East Harlem possible in part due to its innovative financing techniques and the creative vision of many dedicated stakeholders," said HDC Acting President Richard Froehlich. "We consistently demonstrate the transformative outcomes that can be achieved when working within a public private partnership model. Thanks to our development and financial partners, local elected officials, community representatives, and of course our incredible teams at HDC, HPD, and EDC who all worked tirelessly to ensure this project provided much-needed affordable housing and lasting economic opportunity to the East Harlem community."

"Our team remains incredibly excited about the development of the next phase of our mixed-use, mixed-income project in East Harlem," said Richman Group Development Corporation President, Kristin Miller. "We are grateful for this opportunity and eager to continue to work with the community and City leaders to collectively create a vital and dynamic project."

Exterior Street-level Rendering. Caption: One East Harlem, designed by S9 Architecture, is planned to open in 2021.