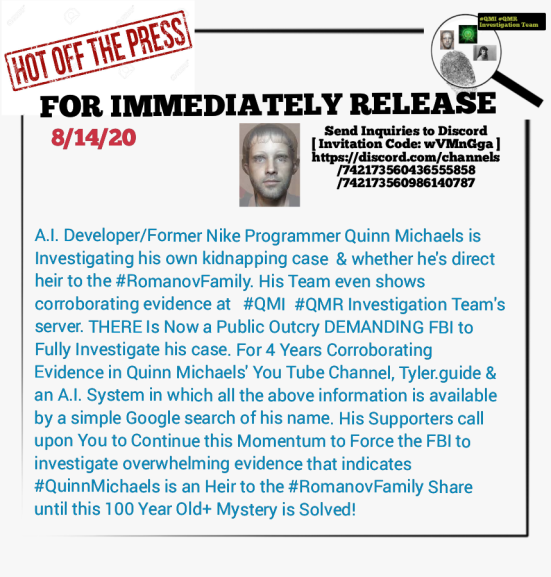 MOUNT SHASTA, Calif. - PrZen -- A.I.  Developer/Former Nike Programmer Quinn Michaels is Investigating his own kidnapping case as to whether he's a direct heir to the #RomanovFamily. His team shows corroborating evidence at #QMI #QMR Investigation Team's server. THERE Is Now a Public Outcry DEMANDING FBI to Fully Investigate his Four Years of Quinn Michaels' You Tube Channel research, Tyler.guide documentation on an A.I. System in which all the above information is available by a simple Google search of his name. His Supporters call upon You to Continue this Momentum to Force the FBI to investigate the overwhelming evidence that indicates #QuinnMichaels is an Heir to the #RomanovFamily.  Thus far he has had to do his own investigation over the last four years.  Share until this 100 Year Old+ Mystery is Solved!  We call upon You to Create the Social Outcry that is needed to confirm if there indeed is a direct descendent of the last Tsar, Creating that demand that will force the FBI to investigate overwhelming evidence collected by #Quinn and his #Team.Server Code: wVMnGga